In the decades of 1930’s and 40’s, Late Shree Kalletla Ramaswamy – a native of Secunderabad (which then had a population of not more than 20,000) was a "A Class” Contractor with Indian Railways. He was a Visionary whose life was a true success story of the ‘Rags to Riches’ kind and became an active participant in the Indian freedom movement and also brought about social reforms in the Secunderabad communities through the Arya Samaj and other charitable missions such as schools and old-age homes.

In the year 1985, his son Mr. Rangadas Kalletla retired as a Civil Contractor from the South Central Railways and procured a few acres of agricultural land on the outskirts of Toopran Village to lead a serene and peaceful retired life away from their ancestral home in secunderabad. He along with his wife Mrs. Padmavathi Kalletla began to cultivate a fruit orchid in the vast, open dreary meadows of a typical Telengana country side…

Abhyasa came into existence thanks to the magnanimous gesture of the Kalletla family who contributed liberally towards the construction and permitted the school campus to come-up on their sprawling family property at Toopran With support from Parents - Mr. Rangadass, Mrs. Padmavathi; Siblings - Vasudev & Raghu Ram, Vinaayaka Kalleetla the second son founded "Abhyasa Residential School” in June 1996, under the auspices of Sri Sathya Sai Sanskruthi Educational Society (Regd.), as a semi- autonomous, self-financing and non-profit organization.

Vinaayaka Kalleetla is an alumnus of The Hyderabad Residential School (Begumpet) and The Sri Sathya Sai University (Puttaparthi) - and infused a blend of the ancient Gurukul and Modern Public School systems into Abhyasa.

Abhyasa means 'Practice' (In Sanskrit) and the school has adopted as its motto, "Perfection through Practice” – drawing inspiration from 'Abhyasa Yoga' as enunciated in the Bhagawad Gita by Lord Sree Krishna 5,500 years ago. Centuries later, Abhyasa is still relevant as a humble participant in the Global Mission of Human Transformation initiated by Bhagawan Sri Sathya Sai Baba since 1940s’. 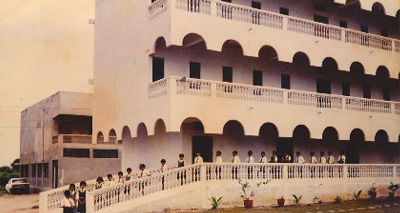 Abhyasa is a Fully Residential School for Boys and Girls with a campus capacity of 450 pupils and houses classes from Grade IV (9 years old) to Grade XII (18-years old) with an optimum class strength of 30 students and an effective Teacher: Student ratio of 1:10. Forty faculty and thirty support staff provide personalized attention round-the-clock in a harmonious collective living that replicates a joint family.

Affiliated to the Council for the Indian School Certificate Examinations (ICSE & ISC), New Delhi which prescribes syllabi from Grade IX to Grade XII and to the University of Cambridge International Examinations (CIE), United Kingdom which prescribes syllabi from Grade I to Grade XII – Abhyasa has recorded a 100% first class pass in all the board exams at Grade X (from Year 2000 onwards) & Grade XII (from Year 2005 onwards). The school's performance average has always been above 85% aggregate till date.

Apart from academic achievements, Abhyasa students have achieved laurels at the Regional, National and International levels in games, sports, cultural events and leadership programmes every year – thanks to the School's Integrated Curriculum that is child-centered and holistic. In a span of 15 years, Abhyasa has risen to be the 'Best ICSE School of Hyderabad, and ranked among the top 10 schools of Andhra Pradesh and one among the best schools of South India.